Above: Terracotta statuette from the tomb of the five chairs, Caere.

Above: Scene from an alabaster cinerary urn from Chiusi (British Museum). The scene depicts an unknown Etruscan Legend. The significance of the up-rooted tree is unknown.

Click the following for more detailed pictures, which will open in a separate window. All pictures are taken from postcards or tourist brochures not marked "Copyright" and therefore taken to be Public Domain. Images will be removed in the event of objections raised by any of the original artists.

Double Flute Player from the Tomb of the Leopards, Tarquinia

Dancer from the Tomb of the Juggler, Tarquinia

Tomb of the Bulls Detail, Tarquinia 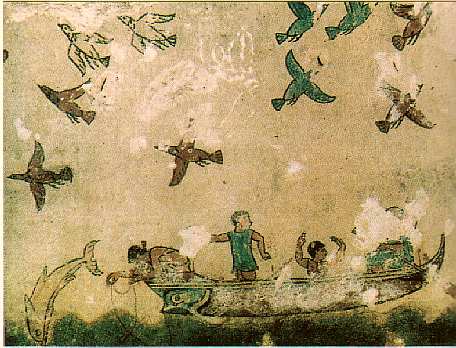 The Tomb of the Bacchantes, Tarquinia