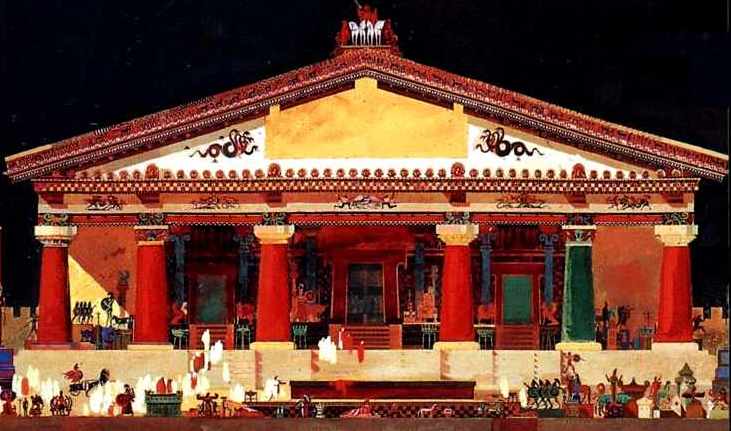 In all studies of Etruscan art, it should be remembered that a large proportion of Etruscan art did not survive up until the present day. We read of the Roman destruction of Volsinii and the destruction of 2000 Etruscan bronzes which were melted down to produce bronze coins. As a result of this, we have a somewhat skewed perception of Etruscan art, in that most of the art that survives today is funerary art, and we form totally wrong impressions about the Etruscans as a result. From excavations at Murlo, Roselle and other city sites, it is apparent that art was a normal part of Etruscan life. In Murlo, a seventh century Etruscan villa has been unearthed. Reconstructions show large painted terracotta panels adorned the entrances. Necropolis art in the form of polychrome reliefs and frescoes hint that the Etruscans used colour to great advantage even from the earliest times. Although painted tombs are among the most famous, it should be remembered that these represent a minority, and that only the aristocratic families could afford such luxuries as tomb frescoes. 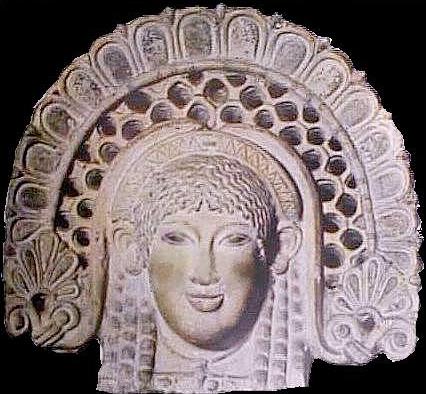 The above image shows part of the antefix from the temple of Juno Sospita, Lanuvium (6th - 5th Century BCE). This is part of the terracotta antefix at the temple of Juno Sospita, and depicts a maenad, Many similar examples have been found, in many cases with traces of the original polychrome decoration. The characteristic smile is shared by many statues of the contemporaneous Greek Archaic period.

Etruscan Art has been said by some 19th and even 20th Century writers to be somehow inferior, although this was usually by erroneous comparison to the Greek mathematical ideals of beauty. Nowadays we can appreciate Etruscan Art much more readily, since Etruscan Artists seem to capture the feeling and the essence of so many of their subjects so much better than for example art of the highly stylised Classical period.

The styles of Etruscan Art vary considerably between the individual Etruscan cities, and there was also significant variation on style depending on the period - so much so that we can date Etruscan art works in many cases by comparison with other examples. The interest in Etruscan Art grew during the renaissance, at which time the extant Etruscan art had considerable stylistic influences on the emerging artists of the renaissance, many of whom lived in former Etruscan cities where such art was plentiful. By the nineteenth century, Etruscan art had grown to a passion, and the "excavation" of Etruscan tombs to meet growing demands increased. An example of this is the brother of Napolean, who owned land near Canino, which included the Etruscan necropolis of Vulci. These "resources" he exploited to great effect, destroying many pieces of Etruscan art in the process, and covering in the tombs with soil afterwards. As a result of this and many other examples, we now have thousands of pieces of Etruscan Art whose provenance is unknown, and which are still in private collections , or have been donated to museums in Europe and the Unted States.

The Art of The Etruscan Gold-Smith

Etruscan gold work was arguably unrivaled in the Mediterranean during the first millennium BCE. A considerable selection of Gold jewellery was found in the Regolini Galassi tomb, which was discovered in the 19th Century, surprisingly with little evidence of looting. Looting was all too common in Ancient days, and was even encouraged officially by Alaric the Goth when his armies overran Rome in the early 5th Century CE. 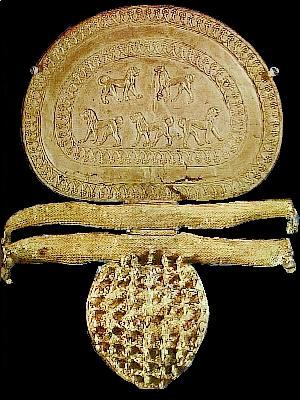 The above magnificent gold fibula was taken from the Regolini- Galassi Tomb, Cerveteri (Caere) and dates back to the 7th Century BCE. This to me is one of the finest examples of Etruscan goldsmith's art. This illustration does not do justice in revealing the fine work that went into such a piece. The precise technique of granulation was for a long time a forgotten art, and it was only rediscovered in the 20th Century by E Treskow.
(A fibula is a kind of large ornamental safety pin used to fasten a robe)