The Tomb of The Olympiads 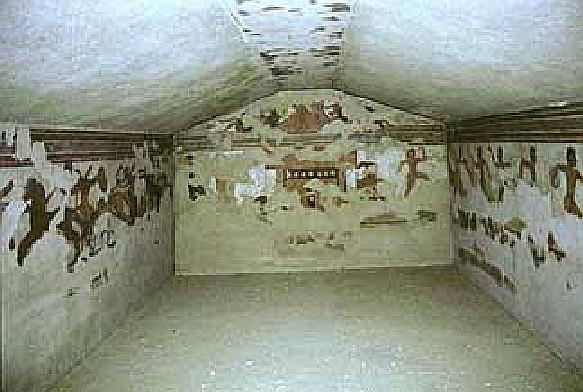 The paintings from this tomb are housed in the Museo Nazionale in Tarquinia. The photographs are from tourist brochures and postcards and images are taken to be public domain.
The back wall of the tomb is poorly preserved but several women dancing in apparent imitation of the gymnasts on the right hand wall. On the tympanum there is a symposium with two men. 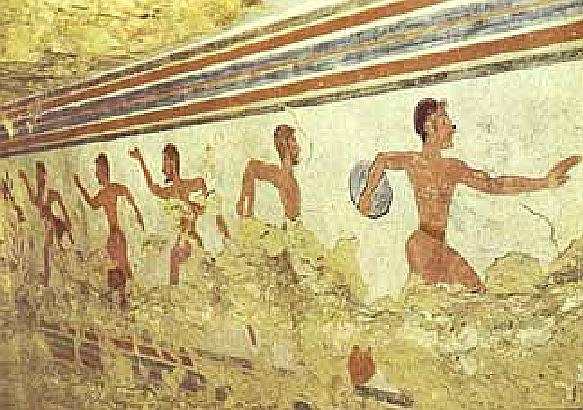 Right Wall: We notice a series of gymnasts. One discobolus, a jumper and three nude runners. The game of phersu, similar to that of "The Tomb of the Augurs" is also depicted, but it is very difficult to discern due to its state of preservation.. 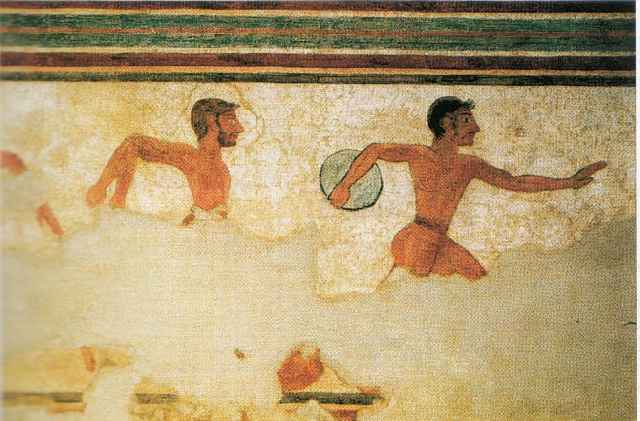 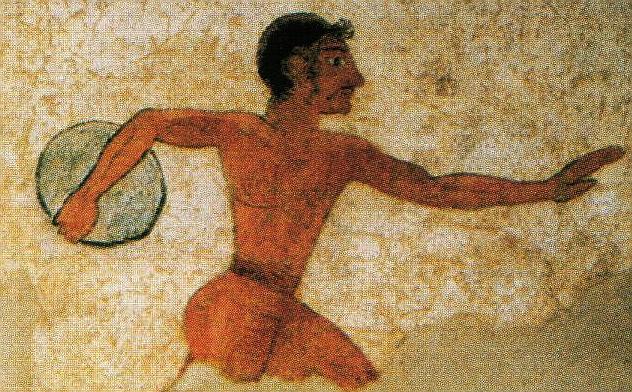 Left Wall : This wall is also poorly preserved, but shows a bigas (two horse chariot) race together with a pair of boxers.

This is how Werner Keller describes the tomb in "The Etruscans"(Chap 9 p129):

"The Tomb of the Olympic Games, at Tarquinia, discovered by C. M. Lerici in 1958, carries us right into the exciting atmosphere of a sporting contest such as Rome enjoyed under its new. king. The painter, like a modern sports photographer, has captured the discus throwers, the jumpers, the boxers at the most gripping moment, when they are tense with concentration and effort. Three runners, naked but for a narrow loincloth, are putting their last ounce into their sprint, a few yards from the finishing line. Nearby a chariot me is in full swing. Four bigae (two-horse chariots) are whirling along the track. The drivers have tied the reins around their waists and are lashing the horses on with whips. The leader, in sight of victory, throws a swift glance over his shoulder. Behind him, the fight for second place is being decided. One chariot, driven at a furious pace, is overtaking its immediate opponent. A fourth driver is out of the race. His chariot has overturned with a broken axle. One horse rears, the other, which has fallen, lies on the ground with its legs sticking up. The driver is hurled through the air. Three seated women spectators cover their faces with their hands in fright."