The ruins of the city of Velch (Roman Vulci) lies between the villages of Canino and Montalto di Castro, in Viterbo province, about 100km north-west of Rome and about 16 km from the sea. 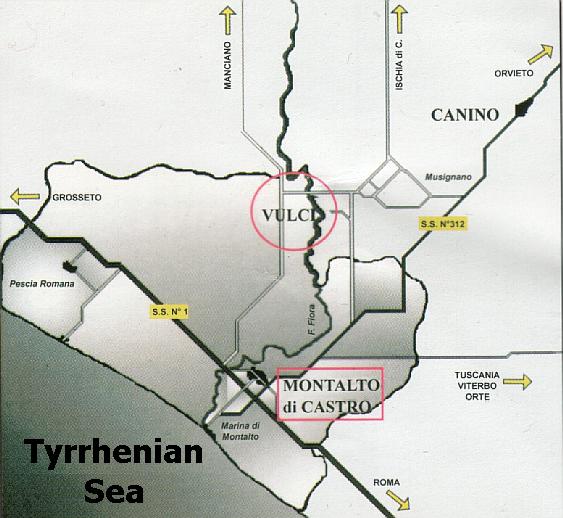 It was located on the West bank of the River Fiora, on a volcanic plateau in an area which is today uninhabited. The site, excavated in 1956, has extensive necropolis areas and an extensive network of streets. It was surrounded by thick walls constructed from Nenfro blocks. Vulci grew out of a number of Villanovan villages and flourished chiefly in the 6th-4th century BCE, largely as a result of trade, the extraction of minerals from nearby Monte Amiata, and the manufacture of bronze jugs and tripods, etc. Vulci was the centre of a large city-state, but after the 6th century it had to relinquish parts of this territory to Rome.

There are a number of important Etrusco-Roman remains on the site of the ancient city, including sections af aquaduct, the Villa of the Cryptoportica (1st Century BCE), a Sanctuary of Hercules, and a fine Roman bridge resting upon Etruscan columns. The footings of an Etruscan temple (Tempio Grande) dating to the 4th Century BCE is also present today. A long stretch of a Roman road with Etruscan foundations and the remains of two city gates can also be seen.

As a member of the Dodecapoli or 12 City States of Etruria, Vulci became one of the most important city states of Etruria, and settlement of the general area was attested along the Fiora (Armenta) valley and on the surrounding hills from the 2nd Millennium BCE. The villages became more numerous again in the Bronze Age and particularly during the Villanovan Period, which was marked by an increased richness of grave goods. In the first half of the 7th Century BCE, Vulci appeared to experience a period of stagnation in contrast to other Etruscan coastal cities. By the end of the 7th Century we note a return to the numbers and grave goods of the tombs. The process of synoecism common to the rest of Etruria resulted in the scattered settlements of the Villanovan Period being replaced by a dominant urban centre on a plain on the South bank of the Fiora River during the latter period.

By the 6th Century, Vulci had become one of the richest cities of Etruria, and, dominated by a growing aristocracy, it began to expand its influence and territory. A testament to this phase is found in the saga of Mastarna and his comrades Aulus and Caeles Vibenna, as portrayed in the frescos of the later François tomb. Here we see that forces from Vulci overthrew the Tarquin dynasty of Rome in collaboration with other cities. With slight of hand they succeeded in dethroning Tarquinius Priscus, and Mastarna assumed power , and changed his name to Servius Tullius. He was considered a strong reformer, and became known as the second founder of Rome. During this period Vulci attained its maximum influence and had expanded its territories to occupy the land between Latium and Tuscany. The mouth of the River Fiora had become a bustling trading port that traded extensively with the Eastern Mediterranean and Magna Graecia, as attested by the distribution of Etruscan bronzes of that period. Imports of Attic, Corinthian and Ionic pottery were reflected in the grave goods of the period, and local ateliers, bolstered by the settlement of migant Greek craftsmen, started to produce large quantities of pottery of superior quality. These ceramics, together with Nenfro sculptures and bronzes of excellent workmanship, reached markets throughout the Mediterranean. The Nenfro Sculptures included lions, sphinxes and centaurs. Some examples of the bronzes were found in the Tomb of the Warrior. (Late 6th Century BCE)

After the crisis of the 5th century BCE, which did not seriously affect Vulci, the recovery of the following century led to the construction of new public works, such as the walls and the temple, discovered in the urban area.

By the second half of the 4th century BCE, Vulci began to feel the weight of Roman expansionism. The struggle to remain independent came to an end in 280 BCE when finally defeated, Vulci was forced to relinquish a large part of its territory, including access to the coast to Rome. Once it had lost its independence, the city declined and rapidly disappeared completely.

Between the end of the Orientalizing Period to the beginning of the Archaic Period, the larger Etruscan cities struggled for control over the emporia. The ports that came under the control of Vulci were Regae and Calusium (Orbetello). Regae (Regisvilla), was located at Murelle (near Montalto Di Castro), where traces of an Etruscan harbor have been found. The port was founded in the 6th Century BCE, apparently by the Pelasgians (Strabo). This was an important trading port for trade with Corinth and later Attica. Strabo (Geography, 5,2,8), speaks of the Pelasgian Prince Maleus, king of Regisvilla, who is attributed as the inventor of the Tuba. While other cities show a decline during the 5th century, Vulci continued to prosper, indicating that Regae was still successful as a trading port. There is evidence of a Pelasgian linguistic substrata in Southern Etruria, which supports Strabo's account. Following the Battle of Cumae in 474BC, the Etruscans no longer had dominance over the Tyrrenian, and the decline of Etruria became apparent during the third century as attested by the presence of generally smaller tombs and poorer grave goods. In 280 BC the Roman consul, Titus Coruncanius, celebrated a Triumph against both Volsinii (Orvieto) and Vulci, which ceded part of its territory, including the port of Regae, to provide land for the new Roman colony at Cosa (Ansedonia). Seven years later the city was used for the foundation of Cosa (273 BC) and the building of the Via Aurelius Veta (240 BC).

Four necropolis areas dating from the 8th century BC have been found around the city of Vulci. To the North is the Necropolis of Osteria. This was the principal necropolis of Vulci, with tombs dating from the Villanovan Period. Unfortunately many of the tombs in this area were excavated in the 19th century, and when the grave goods were recovered, they were unceremoniously filled in again, with little attention to recording any relevant information. Reliefs and grave goods from the Tomb of the Panathenians and the Hypogeum of the bearded Sphynx can be found at the National Museum of Vulci, located at the Castello dell'Abadia.

To the East of Vulci, lie the other three necropolis areas: The 'Necropoli della Polledrara', the Necropolis of Ponte Rotto and the Cavalupo Necropolis. Tombs from the 6th and 5th centuries BC are generally of the hypogeal type. The habit of placing statues of mythical creatures to guard the tombs is characteristic of Vulci. Immensely rich grave goods have been found in these tombs, in particular a large number of ceramics of Greek production, and bronze objects of local production.

The most well-known of the tombs at the Necropolis of Ponte Rotto is the François tomb, famous for its paintings (now at Villa Albani in Rome) portraying, as well as the deceased, episodes from Greek mythology together with characters from Etruscan myths and history. 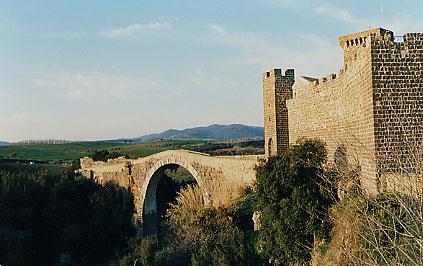 The easiest way to get to Vulci is by car, although there are tour groups which visit the Archaeological Park. If you follow the Rome - Civitavecchia motorway North, then take the Via Aurelia as far as Montalto Di Castro. Turn right after crossing the Fiora River. Montalto Di Castro is quite a good base if you want to stay a few days, and there are numerous hotels in the region.
Qui Dormi L'Etrusco is located in Canino itself and is only a few minutes from the Parco archeologico di Vulci. The accommodation is immaculately clean and very good value for money, and includes an excellent fresh breakfast. The Rooms are decorated with murals from Etruscan tombs in Tarquinia, Cerveteri and Vulci, and there are reminders of Etruscan civilisation everywhere. Canino also boasts a good research museum.

The National Museum of Vulci, located at the Castello dell'Abadia is a good place to start. Numerous cermaics and bronzes from the Vulci Necropolis areas can be seen at the museum. Next to the museum is the spectacular Ponte dell'Abadia, which is a Roman Bridge with Etruscan foundations. The bridge can be crossed on foot and affords a spectacular view of the Fiora river and the now heavily forested area of Vulci.
Back to The Etruscan League Map