The Tomb of the Jugglers 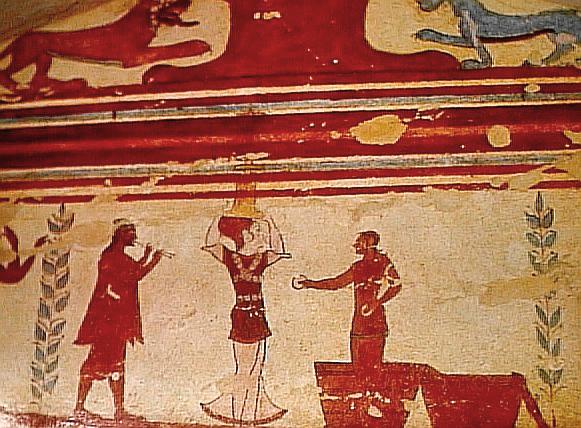 Period: end of the 5th or beginning of the 6th Century BCE Artists: Ionic School.

Plan: rectangular single chamber. The tomb takes its name from the picture of the games on the main wall.

On the pediment, to the right and to the left of the mensolone, are shown two big cats, each raising one of its front paws. The panther on the right is mainly blue in colour with some red patches. 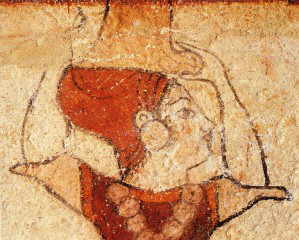 The central fresco shows a woman (above) with a large jug on her head which is superimposed on the frieze. (This "error" is probably due to the fact that the frieze and the figure were painted by two different artists). The principal character, perhaps the tomb occupant, is seated to the right and is the sole spectator. Two great vases are in the foreground, behind which the juggler tosses some disks into the vase brought by the woman (the scene probably represents a type of funerary game). The woman (juggler's assistant) has a see-through dress. Nearby is the figure of an flute player.

On the left wall, are depicted two black men, the first one leads the procession. Another (servant) accompanies him. These figures together with an old old man with baton may possibly represent the trip to the underworld; but during this period, the Etruscans do not always portray death, therefore the old man could be a teacher or guide of the funeral rite). They follow two black birds that fly from the left (south west), seeming to accentuate the meaning of bad augurs and adversity. The man to the side appears to be crouching with fear.

The inscriptions in the tomb probably give the the name of the tomb occupant.(Aranth Heracanas).

On the right wall are four dancers.The dancers show an interesting harmony in their movement.They each have a different colour of hair, which contends to confirm that the Etruscans used to dye their hair. They have all have one false mole, and are heavily made up with their arms covered with bracelets. The first dancer has dark hair; the second has a red hair, a lively expression in her eyes and heavy earrings. 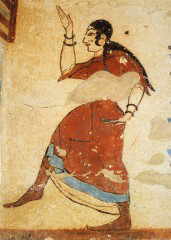 The head of the bystander is obscured. The fourth dancer also has red hair and heavy makeup.