The Tomb of Hunting and Fishing 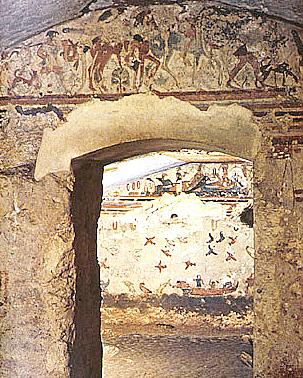 Second room (burial chamber):
Main wall: there are two scenes, one on the fronton and another on the lower part of the wall. At this point a hollow has been dug, almost certainly after the painter had finished his work; in fact the hunting and fishing scene has been cut into.

In the pediment this hollow was perhaps designed for a cinerary urn. Fronton: a banquet scene is represented. To the right a servant with a vase approaches a stamnos (crater). The servant is going to draw wine to bring to the banquet. By the crater other pottery can be seen.

In the center of the banquet a Heptachord can be seen and on the cline a man and a woman; the man holds a kylix; the woman has white skin and the man has red skin. There is pronounced disproportion between the size of natural elements (birds) and the people, a typical feature of the Ionian school. 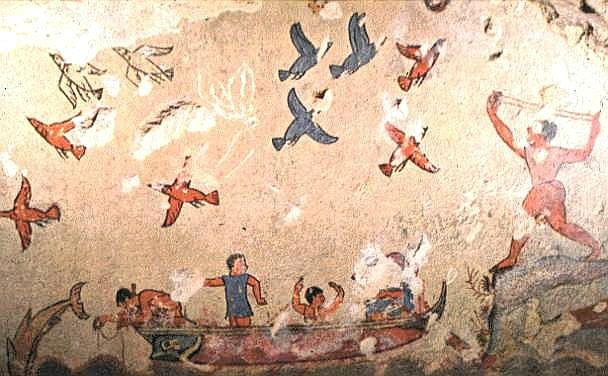 On a boat we notice four fishermen: one intent on rowing- the others fishing, perhaps with a net. From the water muticoloured dolphins and a seagull appears on the surface. . 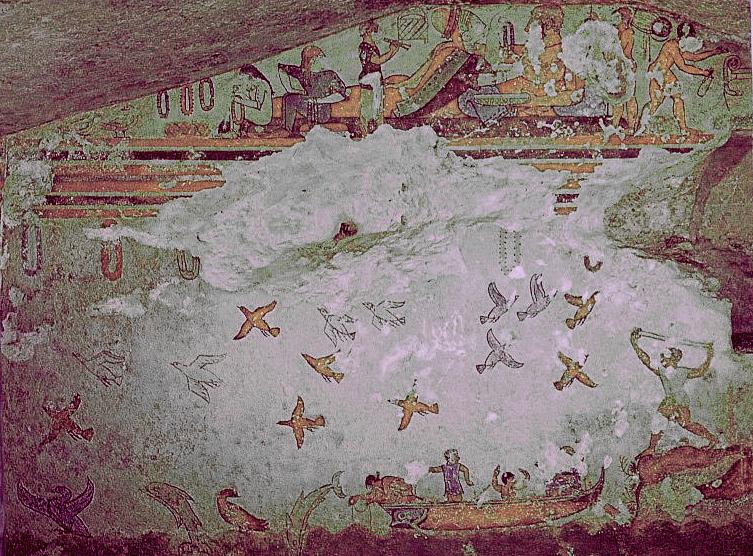 Left wall: from a multicoloured rock a youth is diving, after having disrobed; another youth is scurryng to join in. In the mid-distance, on a boat, a spectator seems to applaud them.
Right wall: Here we find a second hunter and a fisherman with harpoon.

Floor: to the right a large isolated hole (perhaps used for for a cinerary urn); close to the hole we find the four holes where the funerary couch was placed.

Anteroom: This had the function of an atrium or hallway, and was not used for the dead. The side walls are in a state of degradation. The left wall shows two dancers: The picture shows the muscles flexed and conveying a strong sense of movement.

The trees are garlanded with decorations (an ancient tradition). In the corner, under a tree, a seated man plays an aulos (auleta), and is wearing a typical Etruscan hat (tutulus), red in color. On the other wall, a multicoloured fresco in which lotus blossoms and pomegranates are painted.

Pediment: a hunting scene can be seen - very beautiful even if it is small. We are at the end of the VI century and the painters typically use up all available space.

In the centre of the left corner, a servant brings a stool, there is a dog and a pole on to which a buck is hung. The hunter proceeds to his horse. There is also a second horse which is black in color. Another servant with two dogs leads the procession, the wall finishes with two plants; behind the second plant a wild rabbit can be seen.