The Tomb of The Orcus

The tomb of Orcus was first constructed in the mid 4th Century BCE and subsequently enlarged. Its subjects reflect the increasing gloom that was becoming characteristic of Etruscan art during the centuries of their gradual defeat at the hands of the Romans, Celts, Greeks and Punics. This is in marked contrast to the mood of relaxed confidence of the earlier tombs. The bearded Aita, or Hades is the main god of the underworld. The other figure in the tomb is that of Velia, a noble Etruscan woman. She stares into the darkness with a sombre yet disdainful look, almost sneering at death. She is richly attired in elaborately worked earrings and necklaces. The very realistic depiction of the eye, shown from the side rather than frontally as in the earlier period, is a clear indication of the Hellenistic influence and reflects the artist's knowledge of late 4th Century BCE Greek models. 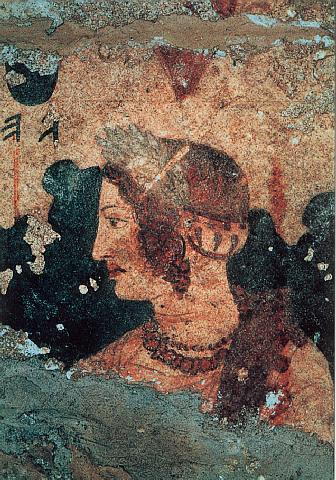 Main Wall: A banquet scene is partially visible; on rich clines one woman with light tunica, a man, in a semi reclining pose, and another bearded man. On the clines there are two young people, one wearing a toga bordered with purple and one large bulla on the neck, the other with an inscribed shield. To side of the banquet a winged demon (CHARUN) of large dimensions, with beard and a red tunic, cape, and is holding a snake in his hand. To the left are traces of a winged demon.

Right Wall: a continuation of the banquet scene with clines on which is Velcha (in Etruscan ARENT VELCHA)

Wall of left: only parts of the fresco remain, with fragmentary inscriptions.

Interpretation: This tomb belonged to the Spurinna, and recalls the battle of Siracuse (compare with the inscription on the Spurinna Tablet). 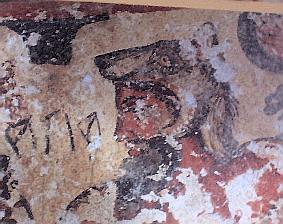 Period: IV sec. (330 approximately). Shape: The tomb lacks a long dromos which explains why it was not discovered earlier.

In the Tomb of the Orcus the 1st niche on the left was caved in after 50 years by the family who constructed Orcus 2 and through this opening it has also invaded the tomb of the Spurinna. The plan of Orcus 2 is not rectangular, but has a complex shape as shown above. The ceiling is patterned for approximately one square meter, and this is perhaps a task that was started and not completed. In the entrance passage are two figures: the god of the underworld Charun, believed to be guardian of the tomb, and a cyclops, from which the name of the tomb is derived. When the tomb was excavated, a monstrous figure was found, which the discoverer took to be Orcus; and which turned out to be the figure of a cyclops.

The figure is quite badly damaged: but has a large nose, and a singe large eye with large stomach (which recalls the story of Ulysses and Polyphemus). The design is poorly proportioned: the legs are too small for the body; indicating that the painter was not very skillful. The images depict a funeral procession, an element which is typical of tombs of the 4th century. The main characters are: Hades (Pluto, or Aita) and Persefone (here Proserpina).

The figure of Aeneas is also possibly shown in the tomb, according to the inscriptions.

By a tree are leaping animals, which are spirits (Pythagorean philosophy) which wait for the body before birth. On the left a blond man, perhaps Agamemnon.