The Tomb of The Lionesses 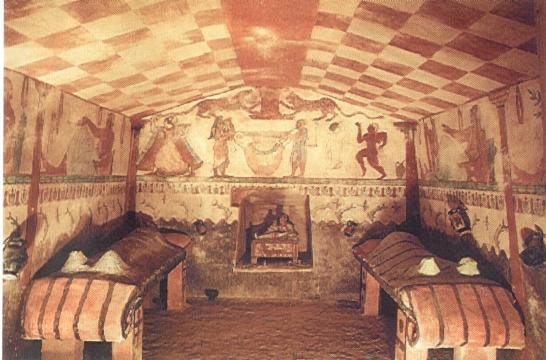 Shape: Single chamber Ceiling: the wide ceiling of the tomb is decorated with a brown and white chessboard pattern. The chamber has six red Tuscan order columns complete with capitals and bases painted on the walls. (four at the corners and two in each of the side walls. These columns give the tomb the appearance of a prothesis (funerary tent).

At the top of the main wall, there are two lionesses with black spots (or perhaps two female panthers) either side of the mensola. The traces of the manes of two animals are just visible (perhaps hippocampus). In the center, is a huge wine crater with a garland of ivy. 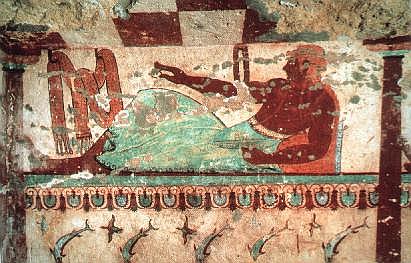 To the right of the crater, there are two dancers male and female. The male dancer is painted in red and (carrying an oinochoe), and the female in white, similar to the contemporary Greek style as found for example in Paesum. To the left side of the crater is a woman wearing a red tutulus and an elaborate mantle, obviously accompanied by a heptachord player, both wearing the characteristic calcei repandi (pointed shoes).

Right Wall: banquet scenes: two men with crowns on head, reclining on pillows; the one on the left is dressed in a green cape and has in his hand an egg and kylix (an egg for the Etruscans was the symbol of rebirth). Over it hangs a wide scarf with flowers and a crown. The figure on the right has a blue cape and red and green crowns are hanging over him.

Left Wall: This continues the banquet scene with another two men reclining on pillows: the one on the left with green cape, and a crown; on the right, with right with blue cape. To his feet, on a stool, is another figure carrying a flute. 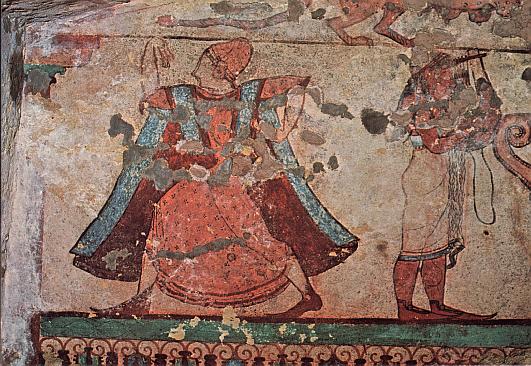 Pediment: On all sides, separated by a series of ornate palmettos and chains of green leaves, the lower part of the wall depicts waves of the sea, where leaping dolphins dive, in some parts, birds have been painted over a black coloured sea (perhaps the tomb occupant had been a seafarer during his life).

Summary : In this tomb, the main themes appear to be those of music, dancing and banquetting. The crater itself does not appear to be a cinerary urn, but is more likely for the consumption of wine, as confirmed by the oinochoe next to it and the scenes in the rest of the tomb.