The Tomb of The Leopards 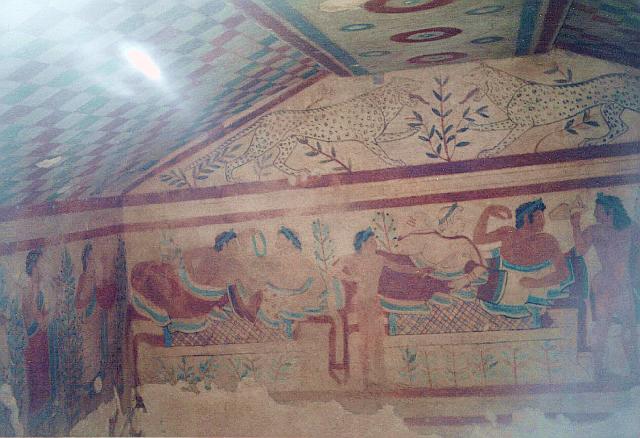 Ceiling: Polychrome chequer board pattered. The columen is decorated with concentric circles (the circles symbolise time).

Fronton: the mensola is absent, replaced by a small olive tree, with a leopard at each side. The fresco only uses two colors.

Main Wall: three clines are shown. Every cline is matrimonial, ie for both man and woman (contrast with the Greek custom where women were excluded from the banquet).

The central cline is covered with cloth, the two shown banqueting (perhaps relatives of the deceased) look towards a servant who is carrying an oinochoe or wine jug. Under the cline there is a series of small trees, which give an impression of the rural landscape in which the funeral banquet is carried out.

The couple on the left hand cline appear to be engrossed in conversation without paying any attention to the others.

The man on the right hand cline is offering a large egg to the woman. The egg is a symbol of life after death (cf. Easter eggs in the Christian tradition). All are wearing crowns of laurel for the festive occasion. 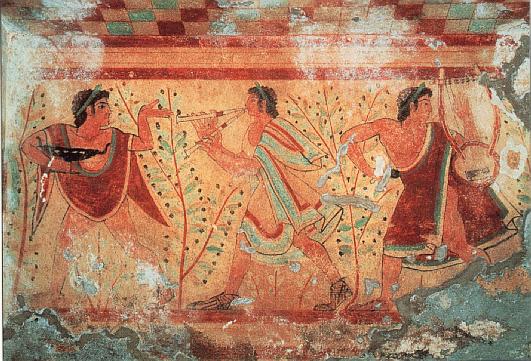 Right Wall: Dancing scenes. Dancers and musicians participate in the choreography. The dancers wear light tebennas which do not impede their movements, and one is carrying a cantharos. Next comes a double flute player (aulos) of which the tubes can be seen clearly. A lyre (testudo) player follows. 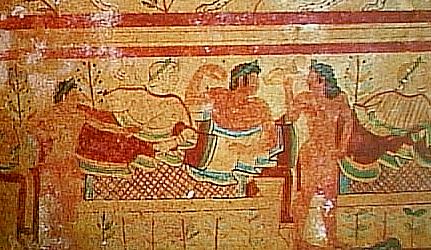 Left Wall: one of the servants assigned to the banquet carries a kylix in his left hand, and in his right hand, an oinochoe.Next to him is a dancer with a cantharos and an olive tree full of fruit. The leaves of the olive tree are light green and dark green. The artist is perhaps trying to create an impression of the leaves blowing in the wind. The next servant is carrying a kylix and the third servant has a long ladle (for stirring the water and wine). The fifth servant has a fan (perhaps for the blowing the fire, or for ventilation).


There is a great deal of symbolism in the frescos in the tomb, which is associated with the elaborate banquets which accompanied an Etruscan funeral.