The Tomb of the Blue Demons 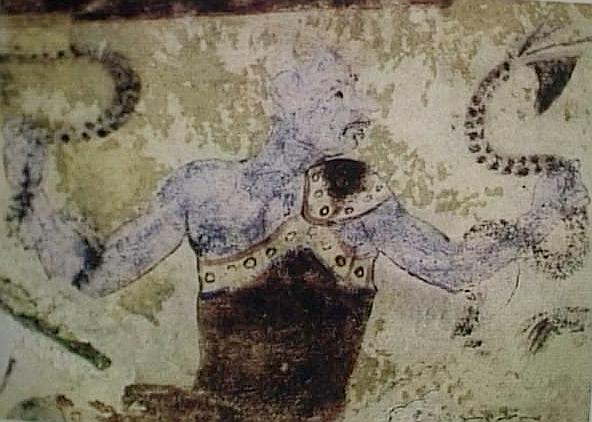 This tomb was only discovered in 1985, after being found during some road works. It is located by the side of the road, adjacent to the Calvario area of the Monterozzi necropolis, although it is not usually open to the public. It is named after the blue and black skinned demons depicted on the right hand wall. This tomb has depictions of hunting scenes and a funeral banquet with four or five couples on clines, combined with a new theme of the deceased departing on a chariot to the underworld. On the left side of the right wall, there is a boat steered by Charun . On the shore a party of people seem set to greet the newcomer to the underworld, flanked by two demons. Two bigger demons (pictured appear on a hillside to the right of them. The blue demon (pictured) is seated on a rock and grasps two serpents, and the black demon seems to rush forward snarling, with piercing eyes like glowing coals. 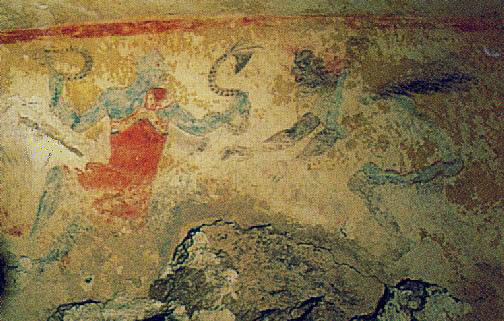 The scenes are a departure from earlier scenes of a happy afterlife, and depict a view of the underworld inhabited by hideous demons. This is one of the few tombs which depict Charon (Etruscan Charun) as the ferryman, in the Greek tradition. However all the demons are typically Etruscan in terms of iconography. In most cases, Charun is seen at the entrance to the underworld, carrying a large mallet. The probable use of this mallet was to open the city gates to Hades. It has been suggested that the gatekeeper at an Etruscan city would have been equipped with a similar mallet to unlock the huge wooden beams that held it secure.