The Tomb of the Bulls

Artists: Probably a vase painter of the Ionian school. 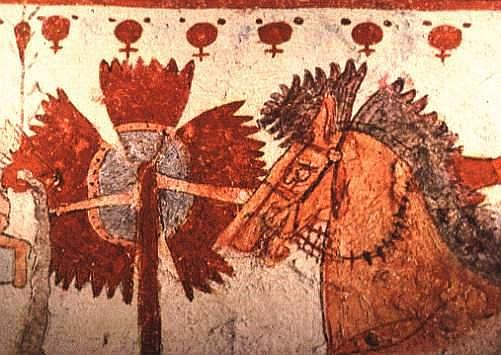 Graziano Baccolini in his new interpretation of the Tomb of the Bulls, suggests that the oval symbols with the crosses, referred to as the Omphalos have very ancient origins. A complete summary of his research on the subject can be found at the following link (Italian Language): http://members.xoom.virgilio.it/Farf/montovoloombelico.htm

On this page only the central portion of the main wall will be discussed. Under the fresco is an inscription: Spurianas (perhaps ancestors of the famous Spurinna of Tarquinia).

On either side of the mensola is an equestrian warrior and a stylised winged lion of Assyrian appearance:

On the central panel between the two doors, is a scene representing the tale of Achilles and Troilus from Greek Mythology. Troilus was one of the son's of king Priam. On hearing of a prophecy that Troy would not be taken if this young prince reached the age of twenty, Achilles determined to kill him. Knowing that Troilos regularly left the city to water his horses, Achilles hid himself near the fountain-house. He waited until Troilos and his sister, Polyxena, were off their guard, then attacked. Troilos managed to leap on to one of the horses but swift-footed Achilles still caught and killed him, thus ensuring that Troy would fall. 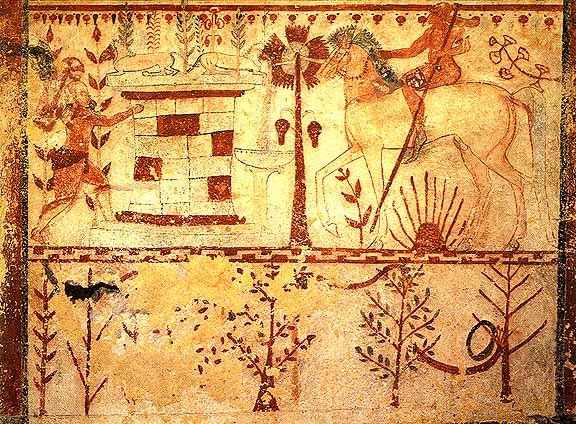 On the left, hiding behind the well, is the swordsman- Achilles. On top of the well are two acroteria in the form of white lions. Water flows from the mouth of the right lion to a trough. Olive trees at different stages of growth are shown on the panel below the main scene. To the right and left of the wall are two olive trees: the one on the right is has full leaves and the one on the left is barren, symbolising life after death. In addition to this, the fruit and foliage of the pomegranate (the Etruscan symbol of life after death) features strongly in this tomb.