The Tomb of The Baron 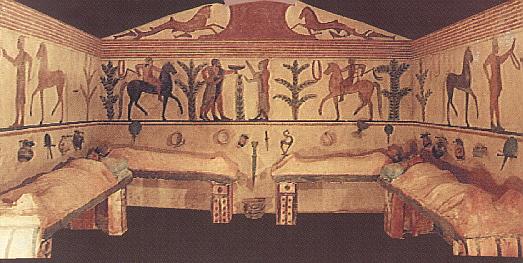 Main Wall: At the top, on the sides of the red "columen" are two "hippocampus" or mythological horses with fish tails accompanied by two red dolphins. 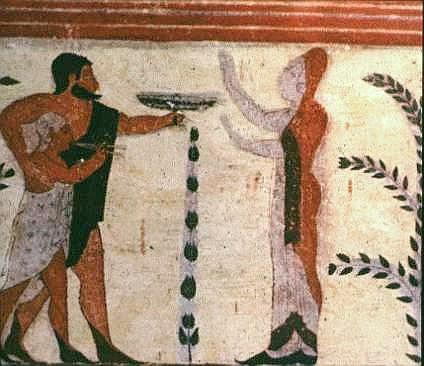 In the center, a bearded man dressed in a black cape is supported by a blond haired youth playing a double flute (auleta) and they advance towards a young woman (priestess ?) carrying a kylix in her hands. The young woman wears a white robe, a red cape, a tutulus (cylindrical hat) and calcei (sandals), raises her arms in a sign of salute. On the left and right appear equestrian figures with whip in hand.

Between each figure, a small tree is painted some with garlands hung on them.

Right Wall: In the center two men with red and black horses, wear red crowns. Small trees, hanging red crowns and and garlands hung on them complete the wall.

Left Wall: the center is occupied by a veiled woman, wearing a tutulus: to her sides two blond men with arms raised hold a black horse and a red horse. All three are dressed with red and green tunica and cape and wear pointed shoes. 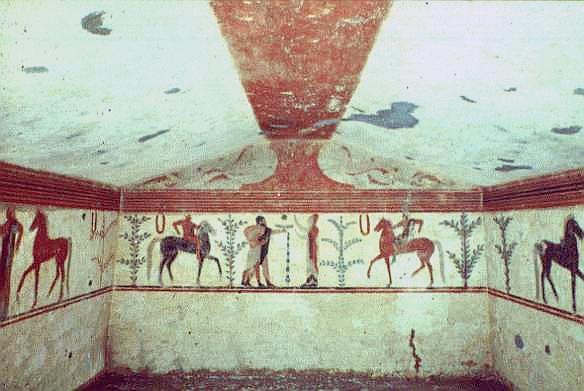 On the left are two olive trees from with hanging garlands and a red crown. The olive tree probably represents the course of life and death; first full of leaves, then with fruit then finally barren.

The scene represents the hope of the spouses to reunite in the afterlife.

The tomb takes its name from one of the two discoverers, Baron Kestner.

The paintings have been variously interpreted:

1st hypothesis: the dead woman is shown saying farewell to her husband and her sons.

2nd hypothesis: the scenes are interpreted in a mythological sense. The deceased are escorted to the kingdom of the dead by the Dioscuri (Castor and Pollux), on the left, who arrive on horseback to assist with the funeral; basically the woman dismisses herself from her loved ones, and is led those who will accompany her (depicted on the the right wall) to the underworld.

3rd hypothesis: the two scenes represent the challenge between life (red horse) and death (black horse). To the right is the starting point, in the center the race itself, and on the left the finish: The black horse wins, and leaves with the woman.