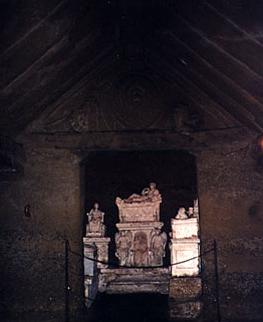 The Tomb of the Reliefs, Perugia

The modern city of Perugia (Roman PERUSIA) Etruscan Perusna (?), is capital of Perugia province and Umbria region, in central Italy, It lies on an irregular cluster of hills overlooking the Umbrian and central Tiber valleys and Lake Trasimeno. Built on an original Umbrian settlement, it was a major city and stronghold of the Etruscan League of 12 which was finally captured by Rome in 310 BCE.

The original Etruscan walls are still standing in many locations with three gateways, as well as the Etruscan nucleus of the well-preserved medieval city enclosed by 13th-century walls, and, on the outskirts, the Etruscan "hypogea" or underground burial chambers of San Manno and of the Volumnii (2nd century BCE). References to Etruscan Perugia are included in the writings of the Greek historian and geographer Strabo, and these allow us to reconstruct an image of an advanced civilisation strongly influenced by Etruria while, to a large extent still retaining its (Indo European) Umbrian language and customs.

Under Roman rule, Perugia once more became part of the province of Umbria but still maintained the burial traditions of the Etruscans. The "Tavole Eugubine" - the Gubbio Tablets are seven bronze plates, dating from the 3rd to the 1st century BCE which describe ceremonies and holy rites written half using the Etruscan alphabet and half using the Latin alphabet. 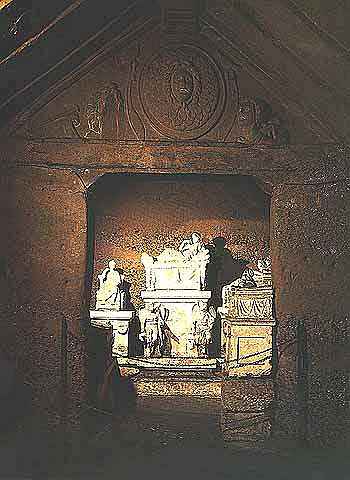 The hypogeum of the Volumnii is a large and well-preserved subterranean chamber tomb situated about 4 km from Perugia, and part of the largest Necropolis in the region, known as the Palazzone. It dates to the second century BCE at a time when it was firmly under the control of Rome. The tomb was discovered in 1840 when the construction of a new road from Perugia to Rome led to its fortuitous discovery. The Volumnii is Latinisation of the Etruscan family name Velimna, and inscriptions bearing the name are found on cinerary urns and the opening to the tomb itself.

Following a series of excavations a large number of smaller tombs were found in the area. In keeping with the practice of the time, the stelae and other material were recovered, no particular records were kept of the locations, stratigraphy and details of the finds, and the excavations were filled in, so that the exact extent of the necropolis is now unknown and unrecoverable. Most of the tombs are from the later Hellenistic period.

The hypogeum itself, is laid out much like a house of the period, with a main atrium and side bed chambers or cubicula, 3 on either side, with secondary chambers opening off the ones in the far corners. There is also a somewhat larger axial chamber at the far end, referred to in the literature as a tablinium, a sort of funerary 'dining-room'. In true Etruscan style, two young winged underworld deities guard the door to the underworld.The tomb dates to between the 2nd and 1st centuries BCE.

çBack to The Etruscan League Map