The Necropolis of Monte Abatone 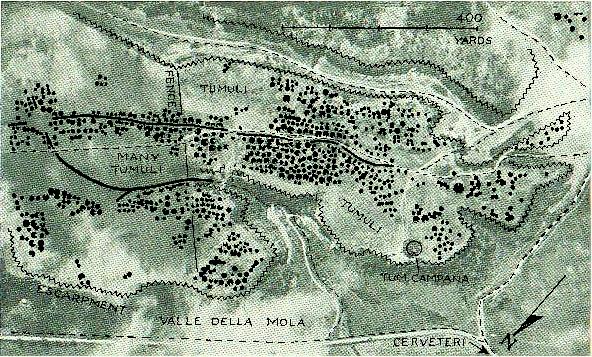 The Necropolis of Mount Abatone

While the necropolis of the Banditaccia, with the its thousand or more tumuli, is at least partly known, the necropolis of Mount Abatone and Mount Abatoncino, although more plundered than the other tombs of the city, are perhaps the lesser known of the necropolises of Caere. However they are certainly not the least important. Not many of the tombs are visitable, but the tombs often have exceptional characteristics: the Campana tumulus, the tomb "Martini-Marescotti" and the tomb "Torlonia ", besides numerous others of which we read only in the literature such as that of the Procoio de Ceri with its "Orientalising period sarcophagus", from the beginning of the 6th Century BC. This has an exceptional sarcophagus of red impasto covered with lions and panthers all around (on the lid) and embossed (on the sides) (Museum of Villa Giulia).

The "Campana" tumulus, toward the western limits of the necropolis, contains two tombs, at different horizons, but with little distance between them. The tomb "Campana 1" is a sepulchre of very simple plan dating from the mid orientalizing period - (third quarter of the 8th century BC). A long dromos leads to the two side cells and the single principle chamber; the right cell contains a bed and a bench, in the left side cell there is a bed and three large hollows dug in the tufa. The design of the principal room, with two side chambers (today badly degraded) and a bench on the floor, introduces more complex elements - At the entrance we find a tall throne (on the right) with rectilinear back finished by two volutes (very similar to the bronze plated throne of the "Regolini-Galassi", that has three hollow depressions on the seat, which as in the tomb "of the Five Chairs", are designed to accommodate the ancestors' figurines. In front of the chair, there is a hollow of the same type of those dug in the left room. The main chamber is not supported by central pillars, but on four pillars inserted in the walls and grooved: on these rest the roof trusses of coverage.

The tomb "Campana 2", leads through from the left room of the Campana (today the light ancient partition is destroyed, so that the two tombs are open to each other). It has a short dromos with side cells with the main chamber not directly at the end , but on the left side. The tomb probably goes back to the first half of the 8th century BC.

The tomb "Martini-Marescotti", discovered in 1961 toward the South limit of the hill, is famous more for its contents than for its architecture (it is of the normal type to two cells), for its beautiful black and red figure Attic ware, contained in the years between 530 and 480 BC., which includes and a large amphora by the painter of Priam.