The History of Etruria 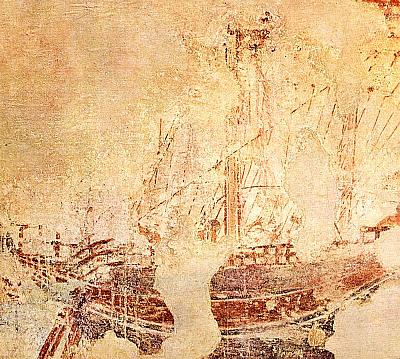 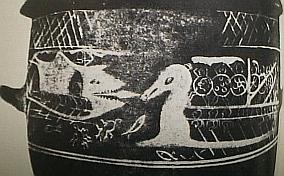 The Etruscan Domination of the Sea (Thalassocracy)

Without meeting any organized opposition, between the 7th and 6th century BC, the growth of Etruscan influence covered a vast area of the Italian peninsula, from the plain of the Po in the north to Campania in the south. With their products, Etruscan merchants reached all the Mediterranean ports and were everywhere rivals (not always peacefully) with the Greeks and Phoenicians.

The Etruscans achieved the peak of their military and commercial strength around the middle of the 6th century when, after having occupied the ports of eastern Corsica, they became the acknowledged masters of the Tyrrhenian Sea.

During this phase of territorial expansion, the Etruscans came into conflict with the Carthaginians, their traditional allies, and the Greeks of the colonies of southern Italy,who were fierce adversaries,

It was Etruria that first gave the Italic peoples the urge to conquer and dominate the sea. All ancient sources point to a Tyrrhenian domination of the Sea or Thalassocracy.

The Etruscans were described as ceaselessly threatening, if not actually controlling the Western Mediterranean, especially the Tyrrhenian sea. According to various sources, the Etruscans colonised Corsica, the Balearic islands and the coasts of Spain (Stephanus of Byzantium), and there are records (Diodorus Siculus) of the struggle with the Phoenicians for an island in the Atlantic (possibly Madeira).

Much of the struggle for power between the Greeks, Phoenicians and Etruscans was centred on the availability of metals on Etruscan territory.

The finding of a Phoenician religious sanctuary (Pyrgi) and a similar Greek Temple (Gravisca) in Etruscan territory show that in later times both powers had a presence on the Etruscan coast. The enormous wealth generated by the trading of metals and other raw materials is reflected in the fact that thousands of Greek vases have been unearthed in the dominant Etruscan cities - so much so that Etruscan finds are largely the basis for our knowledge of Attic pottery. 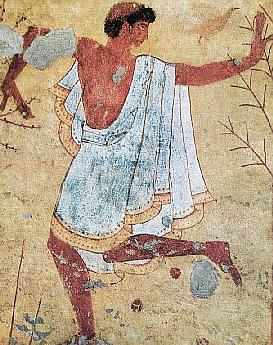 Some time about 545 BC, . Etruria and Carthage made their great alliance. It was clearly directed against the third emerging trading power in the West, the Greeks. Since the beginning of the century, the tension between the three great maritime peoples had steadily increased. Long past were the times when, despite a good deal of piracy, they had remained friendly rivals. The first warning signal of the approaching clash had come some fifty years earlier.

About 600 BC., news reached Carthage of an event that threatened to undermine Punic supremacy in the western Mediterranean and confine the great metropolis to the African coast. The news was that Greek colonists, Phocaeans from lonia, had landed from their warships at the mouth of the Rhone in southern Gaul and established a base, Massalia, modern Marseilles. To the Carthaginians, who had hitherto been the undisputed masters of the sea in the western Mediterranean, this meant the arrival of their Greek competitors right in the midst of their own trading area.

Thanks to their swift warships, the fifty-oared galleys, the Phocaeans had out-manoeuvred and defeated the Carthaginians and secured a key position which threatened to bar the Carthaginian merchants from the coastal traffic between Liguria in Italy, the shores of Provence, and Catalonia in Spain. Worse still, Massalia could block access to one of the most important trading routes to the north, the roads up the Rhone valley and across Gaul. Over this route tin, that rare metal indispensable for bronze making, had long traveled from the mines of Cornwall.

What the Carthaginians feared did in fact happen. The Phocaeans made their new settlement, Massalia, a centre for further advances. Expanding eastward they set up new bases at the sites of modern Nice and Antibes. And before long, their warships appeared off the coast of Spain.

The Carthaginians did not sit idly by. They knew what was at stake. They knew that rivalry for commercial supremacy and spheres of interest had reached the point where Carthage had no option but to prepare for war with the Greeks, unless they wanted to surrender their position for all time. Throughout their widespread settlements and possessions, the Carthaginians accordingly set to work to mobilise their forces. 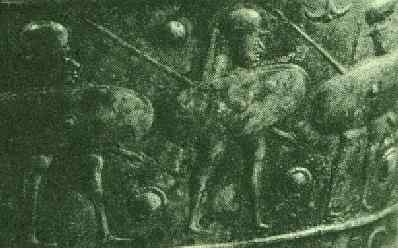 Etruria's interests were even more seriously menaced. The Phocaeans were in a position to control access of shipping to Etruria and threatened to seal off the Tyrrhenian Sea from southern Gaul to Sicily. The waters which had been wide open to the Etruscans as long as anyone could remember, which bore their name, were suddenly in danger of becoming a Greek sea. That would mean that Italy would be cut off from Only two large islands shielded the Etruscan coast. Access to the West was still open through Sardinia, occupied by friendly Carthage, and Corsica. Here, on the island's east coast, the Etruscans had long since established bases and through them exploited the island economically. They exacted from the natives a tribute of resin, wax, and honey. But Etruria's coastal cities seemed unable to make up their minds, to pull themselves together. In any case, what were they to do? Prepare a naval expedition to Massalia? So they marked time until one day rumors were confirmed, and the alarming news broke: Greek colonists, Phocaeans, had landed on Corsica and settled at Aldlia on the east coast of the island. This invasion of Etruria's territory took place about 545 B.C.

What led up to this event was reported in some detail by Herodotus. It happened in the Phocaeans' homeland on the shores of Asia Minor. There, on a promontory near Smyrna, they were forced to abandon their city Phocaea, the modern Turkish Foca, to Persian besiegers under the command of Harpagus, the Median general who helped to put Cyrus on the throne of Persia.

According to Herodotus, Harpagus brought his troops to Phocaea, and a siege, proclaiming to the Phocaeans that he would be satisbed if they consented to pull down a single tower in the fortifications and set apart one house for the service of the king. The Phocaeans, however, dreading the thought of slavery, were very angry at the proposal, and promised to answer on the following day, when they had time to consider the matter, stipulating at the same time that Harpagus should withdraw his forces during their deliberations. This Harpagus consented to do so the troops were withdrawn,

and the Phocaeans at once launched their galleys, put aboard their women and children and movable property, including the statues and other sacred objects from their temples and sailed for Chios. So the Persians on their return took possession of an empty town."

The Phocaeans then tried to buy a group of islands on which to settle, but the Chians refused to sell because they were afraid of trading competition with their own island. So the Phocaeans prepared to sail to Corsica, where twenty years previously on the advice of an oracle they had founded a city called Alalia For five years they lived at Alalia with the former settlers and built temples in the town; but during that period they caused so much annoyance to their neighbours by plunder and pillage that the Tyrrhenians and Carthaginians agreed to attack them with a fleet of sixty ships apiece."

The time for action had come. The Etruscans and the Carthaginians realised that only by acting in concert against any further move by their Greek rivals could they hope to save the situation. So an alliance was made, which is referred to by Aristotle in his Politics: "A state is also something more than a pact of mutual protection or an agreement to exchange goods and services; for in that case Etruscans and Carthaginians, and all others with contractual obligations to each other, would be taken as citizens of a single state."

The testing time for the alliance came a few years later, in about 535 B.C. Phocaean ships were observed in Sardinian waters. Swiftly the Etruscan and Carthaginian vessels were manned and the combined fleet of 120 ships went out to meet the invaders. "The Phocaeans replied by manning their own vessels, also sixty in number, and sailed to meet the enemy off Sardinia," says Herodotus.

In the battle the outnumbered Phocaeans suffered heavy losses, "for forty of their vessels were destroyed and the remaining twenty had their rams so badly wrenched as to render them unfit for service."

There was nothing for it but flight. "The survivors returned to Alalia, took aboard their women and children and such of their property as there was room for, and sailed from Corsica to Rhegium" From there, in the toe of Italy, near the Strait of Messina (modern Reggio di Calabria), "they afterwards sent men to found a new city in Oenotria." This was at Elea, or Velia, modern Castellamare di Bruca, in Lucania, about twenty-five miles south of Paestum. 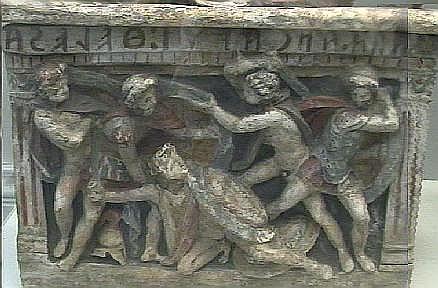 A cruel act of retaliation marred the victory of the two allies. "The Carthaginians and Tyrrhenians drew lots for the possession of the prisoners from the ships which were sunk. Of the Tyrrhenians, the people of Agylla [Caere] got by far the largest number, and they took them all ashore and stoned them to death." As a result, there was a curse on the spot where the murdered Phocaeans lay, which haunted the people of Caere. So, they "sent to Delphi, and were told by the priestess to begin the custom, which they still observe today, of honoring the dead men with a grand funeral ceremony and the holding of athletic and equestrian contests."

Alalia was a tremendous victory and it made a world-wide impression. The ancients understood very well the great significance of this naval battle to the Etruscans and Carthaginians, and rightly considered it an event of international importance. Apart from the victory of Pharaoh Rameses Ill in about 1200 B.C. over the Sea Peoples in a battle off the mouth of the Nile, it was the first great naval battle in history.

The treaty between Etruria and Carthage was renewed and the alliance made yet closer. The treaty also covered commercial matters and divided the western Mediterranean into spheres of interest, with Sardinia going to Carthage and Corsica to Etruria.

The victory of Alalia was of great long-term advantage to the Carthaginians, because it once more gave them undisputed mastery of the seas between Sardinia, Africa, and Spain. They seized the opportunity to strengthen and extend their power. In about 530 B.C. they conquered the former kingdom of Tartessus in Spain, and they established a blockade of the Straits of Gibraltar through which foreign ships were not allowed to pass. Thus the Greeks were locked in the Mediterranean and had no access to the sea route to the tin mines of Britain.

For Etruria the sea to the west was again open, and they made good use of it. There is archaeological evidence of Etruscan merchants visiting Carthage. However, the Etruscans were soon to encounter the Greeks again in another quarter, the southern Tyrrhenian. The. reason was that the Greeks of Cumae, incited by the Phocaeans, constructed a harbour of their own in the sheltered bay of Naples at Dicaearchia, modem Pozzuoli.

With the building of this harbour, an active rival to Etruria was introduced into its own dominion of Campania. Before long, Greek goods were to flood into the country through this port and compete with the Etruscans' own production.

Etruscan control of the seas, that famous thalassocracy which the Greeks so feared, reached its zenith with the battle of Alalia. From then on, its days were numbered.

But who at the time could have foreseen as much? For the moment the gods seemed still favourably disposed, and fortune smiled on the Etruscans. It was just at this time that they were extending and strengthening their empire by their great thrust in the north, where they were to achieve yet further triumphs.