The Tomb of the Monkey, Chiusi

Discovered in 1847 by Alexandre François, the Tomb of the Monkey in Chiusi is cross shaped like several other tombs of that period, such as the tomba del Colle. This shape possibly reflects the style of Etruscan houses of the time. The tomb is carved into the Tufa, similar to those in Tarquinia.

The polychrome frescoes of the Tomb of the Monkey (named after the picture of a monkey on a tree in the entrance chamber) show a similar theme to the well known frescoes in the Tomb of the Juggler in Tarquinia. Although the artwork is not as well executed as those in Tarquinia, it was probably a copy of the latter tomb made by local artisans in Chiusi. 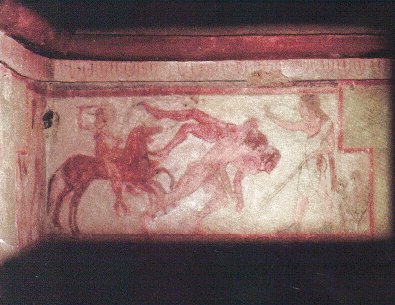 The tomb shows that women also participated in athletic competition, and also depicts a red robed lady with chitonous veils, a spectator, who is sitting on a stool under a parasol watching the actions of the jugglers, dancers, athletes, boxers and chariots etc.

Directly in front of her, is a female dancer who is whirling around while balancing an incense burner on her head, accompanied by an aulos player beside a large basket.

Finds from the tomb are exhibited in the Museo Nazionale Etrusco in Chiusi. 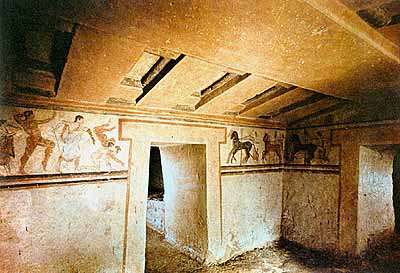