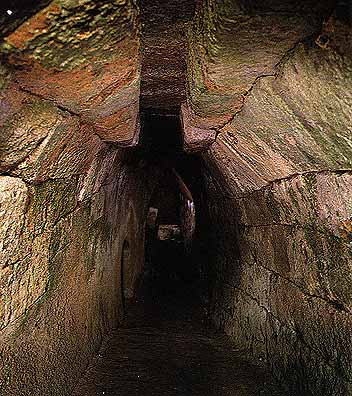 It is not usually possible to visit the Tomb REGOLINI-GALASSI, unless accompanied by a keeper of the Necropolis, because the tomb is normally closed. This tomb is located in the Necropolis of Sorbo, along the road from Bracciano from Cerveteri.

The Regolini Galassi tomb famous for its rich contents, is of the Orientalising period. The original tumulus, was built over by a second tumulus constructed during the 6th century, allowing the further construction of additional tombs - probably for descendants of the same family. These peripheral tombs, though more vulnerable to tomb robbers, have preserved the more ancient tomb inside from inevitable plunder.

The above sketch shows the layout of the tombs in the tumulus. This tomb was discovered intact in April 1836 by Arciprete (Archpriest)Regolini and General Galassi, who gave their names to the tomb. The tomb has a short dromos in the form of a narrow corridor formed of rectangular blocks, forming a pseudo arch. Two side chambers, oval in shape have been dug into the tufa. In its construction, half of the tomb height was excavated from the tufa, and the other half built with square blocks to form a false roof of a wedge shape. The right hand chamber which held funerary ashes in a bronze biconical urn, was sealed off with a block of tufa . At the end of the antechamber, a bronze bed was found on which was laid the body of a warrior of noble family. To transport the body to the tomb a carriage which was found in the same room, now reconstructed in wood in the Museum. This had high narrow fellies set with broad nailheads and bands of palmettes ornamenting each side Eight round shields in light bronze foil, some with moulde d panthers heads embossed on them, probably for ceremonial purpose were discovered along the left hand wall. It should be noted that there are other examples of this in Caere (eg. Tomb of the Shields and Chairs) where shields, or relief impressions of shields are used to decorate the walls of the tombs, perhaps as an illustration of the noble warrior status of the tombs occupants. 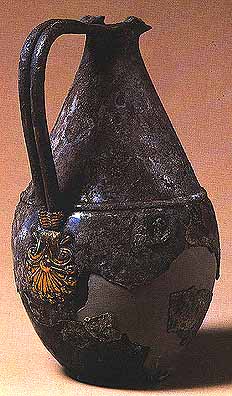 A number of bronze cauldrons were found, with tall conical and round supports intricately decorated with figures. 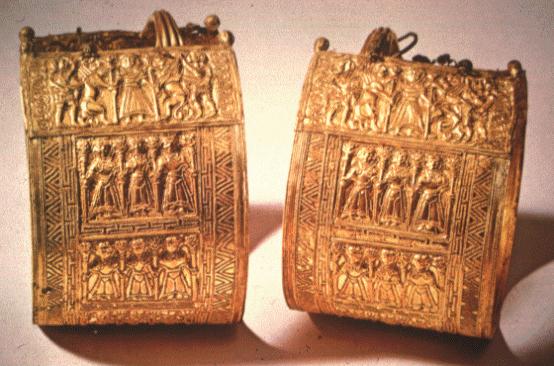 In the dromos a veritable treasure of gold jewellery was found, including the famous Nacelle fibula, a good thirty centimeters long, decorated and adorned with embossed figures; which are repeated on the large gold breast plate or pectoral of the deceased woman, in accordance with oriental tradition. 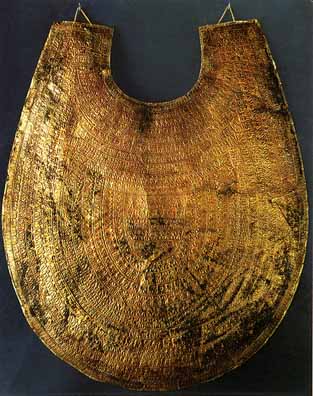 This has fantastic animals including sphinxes , griffons etc.in relief and repoussé . In addition, there are two wide cufflike bracelets decorated with granulation and repoussé depicting the mistress of animals between two rampant lions and a group of palm trees ; a number of necklaces, including a very beautiful example with three amber pendants. Bronze objects include a situla (a type of bucket with handles) inlaid with silver and ivory. Bucchero ware, black figure ceramics, including cups, amphorae and Oinochoe. The remains of a throne, of which the wooden part has perished, and only the bronze coverings remain, These depict richly embossed pacing lions, leaping stags and plants. It also included a footstool.

The hypothesis was, given the wealth of the jewels to two inscriptions made on two cups, that a woman, a princess named Larthia, was buried in the cell. There is some debate that the words Larthia and Mi Larthia, could be a genitive case of Larth , meaning Mi (I am) of Larth, a masculine character.

In the left chamber a two horse chariot or "biga" was discovered, again of timber construction with bronze ornamentation, probably built for use at festivals. This appeared broken and burnt, probably because it couldn't fit the narrow space of the chamber.

Other objects include some very beautiful silver cups and, notably, bucchero ware in the form of a conical bottle, on which was inscribed one of the first reproductions of the Etruscan alphabet .

It is interesting to remember that another tomb of the Necropolis of Sorbo was discovered by the Arciprete Regolini, Called the Tomb of Calabri after the owner of the land, and now destroyed by the agricultural work, its rich collection is also exhibited along with that of the Regolini Galassi, in the Museum Gregoriono Etrusco in the Vatican.

Also see the Tomb at the Vatican Museum website: