The Tomb of the Painted Lions, Caere

THE TOMB OF THE PAINTED LIONS, CERVETERI

The name of the tomb derives from frescoes originally found inside, which unfortunately have long since deteriorated. The layout consists of multiple chambers with two rooms in a single axis and two external lateral cells with an immense uncovered dromos. The entrance doors are arched in shape.

The first chamber has two beds, one male shape, one female. The second room which is of smaller dimensions, accommodates two funeral beds carved into the tufa.

The paintings of black, red and white formed a frieze around to the walls of the rooms, representing lions and stylised reeds.

The external lateral rooms, which also have arched doorways and ceilings and beds accurately carved as in the inner rooms, also contain two carved elements of cylindrical shape which are difficult to interpret. 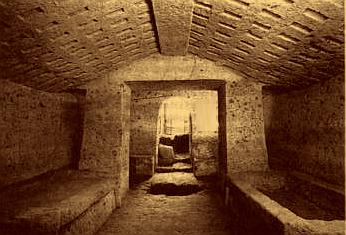 In the drawings made when the frescoes were still visible, they are represented as columns on which were painted lions and other creatures of Assyrian appearance.

These same cylindrical elements can also be seen in other tombs, such as the Tomb of the 5 chairs, also in the Banditaccia, and the Camapana tomb at Monte Abatone. In the latter tomb they are interpreted as containers. These elements date the tomb to the third quarter of the 7th century BC.