The Tomb of the Capitals, Caere

The Tomb of the Capitals, Caere

(First half of 6th Century BCE.)

The tomb layout (above) is identical to that of the tomb of the Greek Vases. This tomb has a short dromos with two lateral chambers. This leads through to an Atrium or entrance hall, from which there are three burial chambers, all with male and female funeral beds (male on the left and female to the right) while in the atrium are male clines only.

The Atrium itself has two pillars, each with a cylindrical base, tapered towards the top, crowned by capitals with the two internal sides decorated with palmettos. 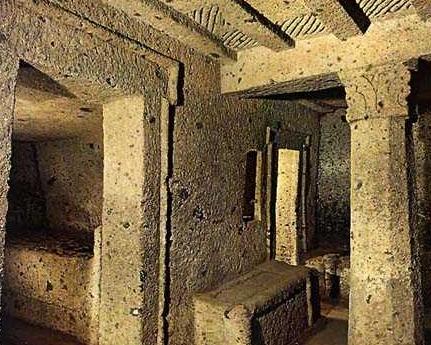 These Capitals which give the tomb its name are of the Aeolian class, with its origins in Phoenician Cyprus. The flat ceiling has feint beams, with diagonal lines which imitate thatch between them.