The Tomb of the Bas Reliefs 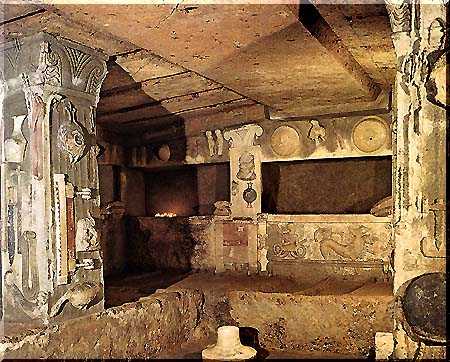 Shape: Single chamber with cut out niches and long dromos.

This tomb was discovered in the 19th century by the Maquis Campana, and the interior is protected by a plate-glass door, in order to prevent further deterioration. It has suffered considerable deterioration in the past, and has been restored in recent years.

The tomb is of the hypogeum type, dug to a considerable depth in the ground. The external entrance was originally watched over by a pair of lions carved out of the tufa.

This is one of the few tombs in Caere where the colours of paintings have survived, as they were painted using a clay base to form reliefs.

The tomb consists of a single chamber, with shelves and hollows in the walls. The ceiling is supported by two pillars, with Aeolian capitals, on which are reproduced objects from domestic and military use through as well as animals (eg cats). The technique used sketching the object on the wall, and then using terracotta clay to create the objects some of which is done using stamps and moulds. All it has been then skillfully covered with vivid colors.

All around the walls runs a frieze of crews: helms, spears, shields, perhaps emphasizing the participation of the deceased in military campaigns. It should be emphasized that the tomb dates to the age of the wars with Rome, a little before end of the 4th Century BCE.

The beds reproduced in the niches around the walls were covered with cloths and pillows moulded with remarkable realism. 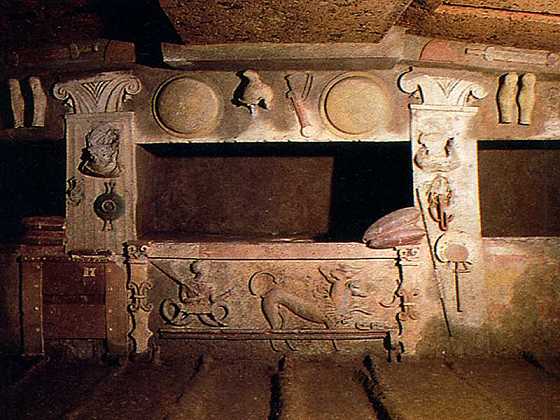 The two occupants probably belong to the family which founded the tomb, representatives of the Matuna family, as noted by an inscription on the cippus (and others in the niches), present in the tomb. On the two semipillars that frame the loculo objects are carved legacies to the life of the aristocratic family: on the left, for the man a water jug, a double handled drinking vessel (Kylix), a chest with lock and studs, on which a sheet of material was folded (perhaps a book); to the right for the woman, there are two necklaces, a necklace of leaves, a stick and a fan. To the feet of the bed on the place are represented two sandals that seem to be worn by the noble woman lying in her alcove.

Also in the tomb appear the representations of two demons of the after life : Charun and Cerberus, the three headed dog, both symbols of the pessimistic Hellenistic period, populated by monsters and dread of the unknown.

The importance of this tomb, beyond its beauty is for its testimony to the last period of independence of the Etruscan civilization, of the return to power of the aristocracy and perhaps the period that marked the end of the freedom for these proud people. It also highlights the equality of the sexes in Etruscan society, even in death.